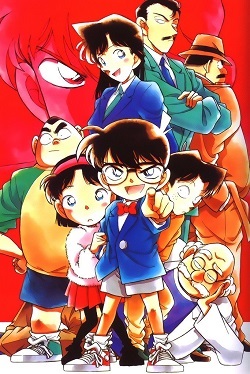 Shinichi Kudo is a high-school student who, by using observation and deduction, is good at solving mysteries. While investigating one, he is caught by the criminals that he was watching and forced to take an experimental drug. Leaving him for dead, the criminals disappear. Instead of killing him, however, the drug turns Shinichi into a little kid.

To preserve the illusion of his disappearance, Shinichi adopts a new name based on his favorite author (Arthur Conan Doyle) and becomes Conan Edogawa. Ran, his (actually Shinichis) childhood friend takes this little boy under her wing and brings him to her home. Conan now lives at a detective agency run by Rans father, but his mind is as keen as ever and he continues to solve mysteries... always allowing Rans father to take all the credit.

As far as everyones concerned, Conan is just a little kid anyway... even to Ran. This is *extremely* frustrating to Conan since nobody will listen to a little boy. Despite this, Conan has a mission... to find the criminals who did this to him and get the antidote to that drug.